The Board of Directors  wishes to acknowledge and thank Marie Belleau for her outstanding dedication, innovation, and results through her involvement with the Nunavut Law Foundation since 2014.

Marie was a Director and then took the leadership role as Chair, since August 2017, up until the end of her third term that ended this past June.

from Eva Tache-Green (left) , newly appointed Director to the Foundation

During her tenure, Marie demonstrated a tireless commitment to the work of the Foundation, and dedication to the Foundation’s mandate to support legal education, law reform, research and access to justice projects in Nunavut.

Without Marie, the Foundation would not have been able to complete the amount of work that we have, and we would not have had the successes without her leadership and efforts during the past six years.

Above all, Marie is an amazing person, and her departure form the Foundation is leaving a big space to fill.

Wallhanging made by Gloria Putumiratuq. 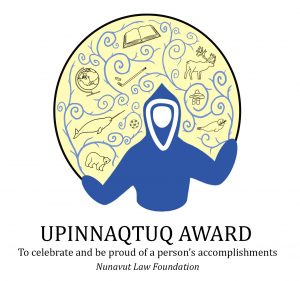 The Nunavut Law Foundation for its 8th year will be awarding students and youths in each region across Nunavut in honour of Justice Beverly Browne, who was the first senior judge in the Nunavut Court of Justice.

The community, principals, teachers, student support assistants, organizations and any member of the public that is not directly related to the student or youth, is being asked to nominate an individual who embodies peace, leadership, conflict resolution, or who made strong efforts to change his/her attitude and behaviour to become a role model.

Submit a letter why the student or youth deserves the scholarship to by Friday, November 15th, 2019.

Youths 14 years and older will be given monetary scholarships, and youths 13 years and under will receive a gift of their choice.

The Law Foundation recently approved a $15,000 grant to support the Nunavut Law Program.

The Foundation welcomes a new Director to its Board

Kyle DeYoung of Iqaluit is appointed as a Director of the Law Foundation.

Learn more about our current Directors and Chairperson.

The Board is delighted to award 6 deserving recipients from Nunavut currently enrolled in law or law-related studies in Nunavut, Ottawa and Victoria.

Stay tuned for the announcement of recipients in September 2016.

The Foundation for its 5th consecutive year will be awarding scholarships to students and youths in each region across Nunavut in honour of Justice Beverly Browne, who was the first senior judge in the Nunavut Court of Justice. She demonstrated great leadership in the community and had a strong commitment and passion for working with youth.

Nominations are open for Students enrolled in grade 6 to 12 or Youths between the ages of 10 to 20 years old.