by Nunavut Law Foundation in Updates and Announcements 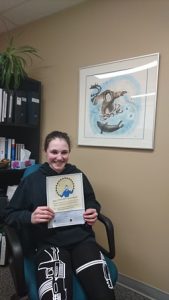 January 26, 2017 Taryn Lavallee from Iqaluit  stopped by the Law Society office this week – A deserving Upinnaqtuq Award recipient for her exceptional achievements both in sport and at school and

for the important contributions she has made as a Junior Coach Assistant ( Speed Skating). Her coach John Maurice states that she is ”a great ambassador for Nunavut with a very promising future ahead of you”. Well done Taryn ! A role model and inspiration for future generations to come! Congratulations! 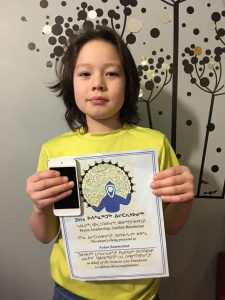 Just in time to celebrate the new year,  Nolan Sammurtok, of Rankin Inlet (left), received a gift of his choice for the under 14 category as one of the 2016 recipient of the Upinnaqtuq Award.

The Foundation was delighted to learn from his Inuktitut cultural teacher, Maryann Issakiark, that Nolan has been “working toward the common good” of all including by “supporting his fellow students so they could also achieve their personal goals”. A truly inspiring young man! The future looks bright. Congratulations!

On December 19, Foundation Director Marie Belleau welcomed Colby Hickey from Iqaluit (right) to hand over his Upinnaqtuq Award.  Colby’s nomination letter from John Maurice stated ” you are a great ambassador for Nunavut with a very promising future ahead of you. Not only have you demonstrated exceptional achievements both in sport and at school, you have made important contributions as a Junior Assistant Coach for which you should be proud of. You are a role model and an inspiration for future generations to come”. The Foundation wishes you the best of luck in your future.  Congratulations! 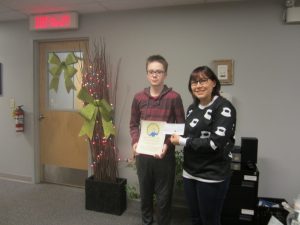 November 2016 –   We are delighted to announce the first of 4 Upinnaqtuq Recipients : Jillian Kyak from Pond Inlet. 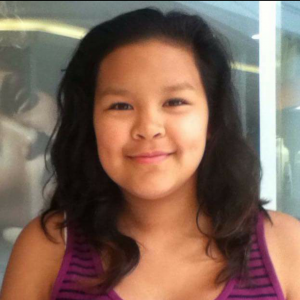 Jillian is a deserving recipient for being “an insightful, compassionate, and positive student that has a beneficial impact on classroom dynamics and energy”. Her teachers, Jay McKechnie & Anisa Suno, have told us that ”Jillian exemplifies many qualities that make her a strong student, but the kindness and respect that she shows to her peers is what makes her a leader”.

You are without a doubt an exceptional inspiration for being a “true ambassador of   peace and leadership”. Congratulations!

We are delighted to announce that Gloria Song, a Lucien Ukaliannuk Recipient, has successfully completed her Master of Laws. Gloria (middle) with her mother and husband at the graduation ceremony this past June. Congratulations Gloria! 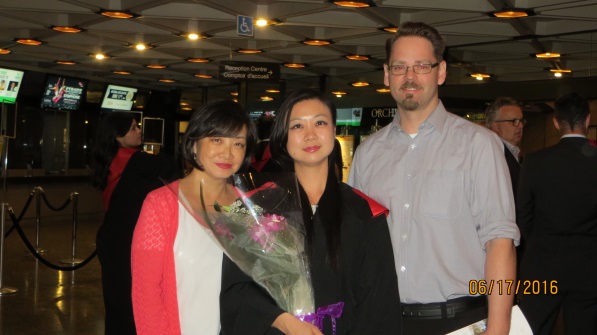 Gloria’s main research focused on access to justice issues in Nunavut’s employment law system and she also studied the recent settlement of NTI’s lawsuit over the implementation of the Nunavut Land Claims Agreement. We look forward to providing further updates once Gloria’s papers been published.

Finally Gloria writes:  My graduate experience has allowed me to gain a deeper understanding of the infrastructural challenges facing the territory, and it has fostered my passion for improving access to justice in Nunavut. I hope to continue to work in this area, and as such am very thankful for the Nunavut Law Foundation’s support.